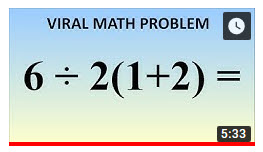 Recently, I came across this youtube video by ‘MindYourDecisions’…

In this clip from years ago, (SPOILER ALERT…) Presh explains how sticking to the ‘operations order’ determines the correct answer to be 9. I was quite shocked at this result. My mental calculation arrived at ‘1’ without any uncertainty. Going through the comments made me feel a little less concerned about my mathematical understanding. Many people were battling for a ‘1’ as the answer.

A quick inspection of the equation shows the source of the ambiguity. It would be common, in my travels, to interpret 6/2(1+2) as 6/(2(1+2)) with the lack of a multiplication sign signalling that the ‘2/(1+2)’ should be treated as a denominator. Adding the multiplication sign… 6/2*(1+2) makes it more clearer that the parentheses should be treated as a separate term. Even with the added ‘*’ I find the equation to be a touch ambiguous.

There is ambiguity in the equation to the point that I would suggest that the real answer should not be defined. Order of operations is a clear convention but it is clear from the comments generated by the clip that other conventions are in use even if they are not strictly taught.

I expect, because equations are rarely put on a single line, as this one is, it is probably not necessary to state that ‘2(1+2)’ would be treated as a whole in a modern math class. I find it amusing to consider that a mathematics lecturer would probably be more likely to get this wrong than someone who learnt their math at primary school and then left it at that. The lecturer could be expected to apply the usual conventions and that would be their undoing.

What are those usual conventions I am referring to? As far as I know, they are not explicity stated. They are followed due to the need to keep one’s mathetmatical workings free of ambiguity. I like to think it is quite unlikely that a mathematician would ever produce such a confusing equation.